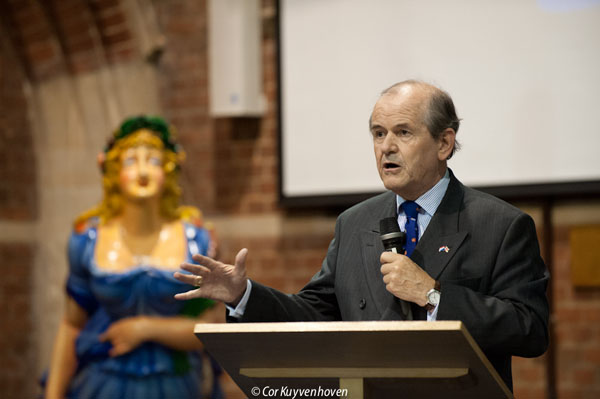 Mr Pim Waldeck, Ambassador of the Kingdom of the Netherlands to the United Kingdom

Let me begin by extending my sincere compliments to Henk van der Linden for organising this important event.

Sincere compliments more in particular for his unremitting labour to prevent a remarkable episode of naval history slipping away into oblivion. The result of all his efforts is the English translation of his book “The Live Bait Squadron”, which is launched today and must give him great satisfaction. His book is a deserving tribute to the 1459 British Royal Naval men who died in the course of only a few hours on the 22nd of September 1914, almost a hundred years ago.

The sinking of three British armoured cruisers, HMS Aboukir, HMS Hogue and HMS Cressy off the Dutch coast by one single German submarine was an extraordinary event which was pivotal in the change of British naval strategy confronted as it was by the realities of the war at sea at the beginning of the Great War.

In a mere 90 minutes the submarine had announced itself as the most dangerous weapon in sea warfare for years to come. A weapon that made the dreadnoughts of the day, the “Castles of Steel”, as vulnerable as any other vessel.

The sinking of the three cruisers was an important event in the Netherlands too. By sheer luck our country was left nursing its traditional neutrality by the German High Command when Germany attacked Belgium and France in August 1914.

Only fairly recently historians and authors in the Netherlands, like Henk van der Linden, began to show an interest in the years of the First World War.

To keep out of the war and all its horrors the Dutch were faced with a delicate balancing act between the belligerents, as well as with the necessity to accept the loss of life and what is called today collateral damage.

One of the early incidents during the war years in which the Dutch became involved was the torpedoing of Aboukir, Hogue and Cressy.

Two Dutch vessels, the cargo’s Flora and Titan, were able to rescue 433 crew from the three ill-fated cruisers. A number of drowned sailors found their last resting place in Dutch cemeteries.

Here, in Chatham, a memorial was dedicated to those killed in the cruisers.

The wrecks of Aboukir, Hogue and Cressy, resting close together at the bottom of the Broad Fourteens in the North Sea, became war graves and were almost forgotten. Until some years ago when sport divers and salvage companies started to take an interest in the ships. Since then a number of incidents involving illegal salvage of military shipwrecks on the North Sea seabed has been brought to the attention of the Dutch Government.

One can understand that concern about these activities was caused in the United Kingdom after press reports appeared about what was considered disturbance of war graves.

It goes without saying that the Dutch Government condemns any disturbance of designated ware graves in our territorial waters. The same goes for war graves in international waters, but obviously the riparian state has far less jurisdiction in those waters.

If artefacts of a certain value from military shipwrecks are brought ashore in the Netherlands, criminal charges can be filed against the salvage personnel involved. These can only be successful if the salvage has been carried out illegally.

But to be successful it must be unequivocally clear that the shipwreck in question is that of a State vessel enjoying sovereign immunity and that the flag State confirms its ownership of the vessel concerned.

In addition, of course, the evidentiary and criminal procedural requirements must be met as well, including relating to jurisdiction.

One of the three incidents which I mentioned earlier concerns the British cruisers.

In investigating the case, the Dutch Public Prosecutor’ s Office is likely to be met by two issues which will take time to be fully understood.

The first is that the ships lay in international waters.

Maritime war graves do not have a specific legal status under international law but are protected by national – and therefore territorially limited – legislation. The British cruisers sank outside our territorial waters, so this is a complicating factor.

The British cruisers are obviously, at least de facto, war graves. The question however is whether or not they are still owned and claimed by the UK government. The answer to this question would help to establish the legal status of the wrecks, and consequently would hopefully give substance to ways of prosecution of illegal salvage.

Now there is a reasonable chance, as is also mentioned in “The Live Bait Squadron”, that the wrecks were sold in the past by the British government. I choose to elaborate a little bit on the issue of the disturbance of the wrecks of the three cruisers, because I want to demonstrate that the matter is more complex than people think.

The phrase used in UK press reports: “sunk off the Dutch coast” is subject to specification, and does not mean that there is an exclusive responsibility of the Dutch Government. Then, there are thousands of wrecks on the North Sea seabed. Many of them are military and therefore most likely official war graves.

The physical possibilities to actually prevent illegal acts are limited. For instance, it is obviously not possible to station a law enforcement vessel all the time near the coordinates of every known wreck site.

I believe that the incident of the disturbance of the wrecks of Aboukir, Hogue and Cressy has shown that there is a need for international cooperation on the issue of illegal salvage activities on the North Sea.

The sensitivities around the wrecks are very well understood in the Netherlands where we are still on the look-out for some missing warships of our own, lost with their crews in the North Sea in WWII.

I am happy that we could share these feelings of compassion with the fate of the crewmembers of Aboukir, Hogue and Cressy during a ceremony of remembrance in September 2010 presided over by the Mayor of The Hague and with the mayors of Noordwijk and Flushing in attendance.

At The Hague, Noordwijk and Flushing members of the crews of HMS Aboukir, HMS Hogue and HMS Cressy found a last resting place while many of their brothers-in-arms are on eternal patrol in the North Sea.

I sincerely hope that many people will be interested to read Henk van der Linden’ s captivating story of “The Live Bait Squadron”.