The wrecks still rest on the bottom of the North Sea about 20 miles off the Dutch coast at a depth of about 35 meters. Only HMS Cressy is lying keel-up, the other two are resting in what could be called a normal position, with their keels down.

The derelicts are still regarded as war graves and deserve to be respected as such. Nevertheless, the underwater site has developed into a popular diving location, not least because of the precious new fauna and flora that came into being in and around the wrecks.  The divers are generally known to show great consideration for the sunken ships. The same can’t be said, however, of the so-called salvagers whose dismantling actions caused a lot of commotion back in 2010, both in Great Britain and The Netherlands.  Eventually, their destructive acts were brought to an end, mostly thanks to an effective lobby by the British Western Front Association and others, and a successful signature campaign in Holland. One day, when the wreck salvagers were putting into port in The Netherlands, the authorities were readily waiting for them and their haul was  sequestrated.  The Dutch Public Prosecutor then also initiated criminal proceedings against them, and all these adverse conditions apparently so deterred the “salvagers” that they gave up visiting the wrecks any more.

At the occasion of the 22 September 2012 presentation in Chatham the then Dutch Ambassador to London, Mr Pim Waldeck, considered the legal position of the shipwrecks:

‘If artefacts of a certain value from military shipwrecks are brought ashore in the Netherlands, criminal charges can be filed against the salvage personnel involved. These can only be successful if the salvage has been carried out illegally.

But to be successful it must be unequivocally clear that the shipwreck in question is that of a State vessel enjoying sovereign immunity and that the flag State confirms its ownership of the vessel concerned. In addition, of course, the evidentiary and criminal procedural requirements must be met as well, including relating to jurisdiction.

One of the three incidents that I mentioned earlier concerns the British cruisers. In investigating the case, the Dutch Public Prosecutor’ s Office is likely to be met by two issues, which will take time to be fully understood.

The first is that the ships lay in international waters. Maritime war graves do not have a specific legal status under international law but are protected by national – and therefore territorially limited – legislation. The British cruisers sank outside our territorial waters, so this is a complicating factor.

The second issue is the ownership of the wrecks. Warships retain their special status even after sinking, including the complete immunity and the exclusive jurisdiction of the flag state. However, this applies only if the flag state maintains (and continues to claim) ownership of the vessels and maintains their status of warships. The British cruisers are obviously, at least de facto, war graves. The question however is whether or not they are still owned and claimed by the UK government.

The answer to this question would help to establish the legal status of the wrecks, and consequently would hopefully give substance to ways of prosecution of illegal salvage. Now there is a reasonable chance, as is also mentioned in “The Live Bait Squadron”, that the wrecks were sold in the past by the British government’.

It is quite conceivable that after these words further consideration has been given to determine the exact legal status of the cruisers, but so far no relevant information has reached us.

In point of fact in 1958 the British authorities allowed a German contractors firm to carry out demolition operations on the cruisers. Recently, I approached this firm to try and obtain further information on this topic, but unfortunately I got no response at all.

The pictures, kindly placed at our disposal by Mr Dirk Ruis, show some pieces of equipment presumably originating from the three cruisers and landed by those contractors at Vlaardingen (near Rotterdam) quayside. 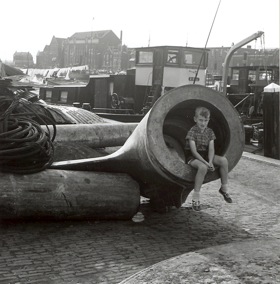