The official name of the six ships of the Cressy-class was ‘The 7th Cruiser Squadron’.

This squadron was created at the Nore as a part of the reorganisation of the Royal Navy’s home fleets, who took effect on 1 May 1912. It formed part of the Third Fleet of the Home Fleets and effectively served as a reserve force stationed on the south coast of England. They were already considered obsolescent despite being less than 12 years old. Their status meant that most of the time they were manned by ‘nucleus crews’ an innovation introduced by Admiral Jackie Fisher a few years earlier. Their Ships’ complements of 700 men plus officers were only brought up to full strength for manoeuvres or mobilisation. De nucleus crews were expected to keep the ships in a seaworthy condition the rest of the time.

On 21 august 1914 Commodore Roger Keyes – commanding a submarine squadron also stationed at Harwich – wrote to his superior Admiral Sir Arthur Leveson warning that in his opinion the ships were at extreme risk of attack and sinking by German ships because of their age and inexperienced crews and their task to patrol the shallow waters of the Doggerbank and the Broad Fourteens.

The risk to the ships was so severe that they had earned the nickname ‘the live bait squadron’ within the fleet.  (Source Wikipedia).

Thanks to Mr Malcolm Oatley I have in my archives the story of Commander Austin Tyrer, he was one of the Hogue’s survivors, picked up by the Dutch steamer ‘Flora’. This is a part of his extensive story, in the publication ‘The Great War, I was there’, 27th October 1938 , pages 166-169.

‘We had been told that our job was to support the 1st and 3rd Flotillas of light cruisers and destroyers, but hitherto they had conducted their activities without calling on us. Could there be another reason for our presence in the Narrow Seas, we wondered? And then, at last, someone suggested one.

We were a “suicide squadron,” he averred. Our real function was to act as decoys. We were to entice the German Fleet into attacking us, then lead it away from his base southwards, while our Grand Fleet and Battle-Cruiser Squadron swept down from the northward, cut off its retreat, cornered it, and finally annihilated it over our dead bodies.

Within a week of first having been whispered, this explanation of our real function had become an accepted fact, not merely with the men in the squadron itself but with the whole of Sheerness and even the main fleets up north.’

My (Henk) comment: this could be true, black humour is typical in hard circumstances. But nevertheless: anyone who can confirm this?

The wrecks of the cruisers are quite popular among amateur fishermen, since fish –cod in particular- seem to do well there. A few weeks ago an angler came to see Klaudie (our documentary maker) with quite a remarkable catch, see photograph. 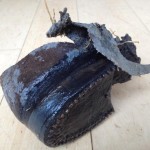 He was unable to reproduce the exact location of the catch so it remains unclear above which of cruisers he had been angling then. The shoe is currently drying at Klaudie’s place. It is her intention as well as her husband Ben’s to set up a small sub-exposition in collaboration with the Hague Scheveningen Museum Musee in order to put on display the various objects that over time have been brought to the surface or washed ashore. This initiative will be one of the centennial related events – that much can be unveiled already.

The Postmaster General has learnt with deep regret that the following Officers of the Post Office have lost their lives in the Service of their Country while serving with the Naval and Military Forces of His Majesty”.

Follows an alphabetical list with the names of all the men killed in action, names in full, Post Office Rank, Office, Regiment or Ship.  No less than 182 names in those pages, 76 of them belonging to the cruisers, HMS Aboukir 35, Cressy 28 and Hogue 13.

As far as I can see the descendants of two out of those 76 fallen crew members are now members of our Society, Richard Fennessy, Postman of Battersea Post Office (HMS Aboukir), en John Dear, Porter of the Parcel Office, L.P.S.  (HMS Cressy).

This interesting information was given us by The British Postal Museum & Archive, notably Mrs Penny McMahon, penny.mcmahon@postalheritage.org.uk