The medal of  Robert Johnson, HMS Hogue
This photo was sent by Mr Michael Scott, Robert was his great uncle. More about Robert in Bulletin-6. 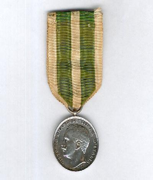 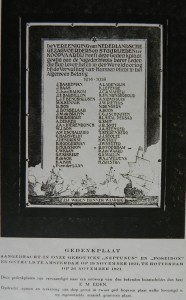 Mr Robin McGarel-Groves sent me the Memorial of midshipsman Anthony Alsopp which is on the wall of the church at Wimborne St Giles, the seat of the Earls of Shaftesbury. Anthony’s mother was the sister of the 7th Earl of Shaftesbury.

Mrs. Cheryl Arnold sent me a photo of the headstone of Mr. Richard Fennessy, at Spalding Cemetary. The photo says it all. No words needed as Mr Fennessey has a sea grave. Mr. Richard Fennessy (HMS Aboukir) was one of the first Members of our Society. He was presented by Miss Cecilia Mann. Until now this is all I know about him: Richard Fennessy, Private, CH/13254, (RMR/B/603), Royal Marine Light Infantry.

A Dutch (colleague) WFA-member Mr Anthony Willemsen sent me photographs of a monument in Wesleton (Suffolk). It shows the names of two of the Cressy-men.

And here another one. Sent by Mr Paul Rose from King’s Lynn. His Grandfather was John Nathaniel Rose. He joined The Society recently, as well as Colin Fysh, who lost his Grandfather too, John William Fysh.

Thanks to our Members we’re able to add some more Memorials to our collection!

Sent in by Mrs Kathleen Woodward, granddaughter of John Dear of British Royal Post, (Leading Stoker on HMS Cressy). Also the second contribution is by Mrs Woodward, viz. a photograph of the Mount Pleasant memorial.

Mrs Alice Barrigan sent us a photograph of the commemorative plaque for Midshipman Duncan Stubbs. It’s from St. Cuthberts Church, Ormesby near Middlesbrough.

I’m adding a picture of the plaque of Midshipsman Herbert Lawson Riley, in the Britannia Royal Naval College in Dartmouth.

Thirteen midshipmen, young boys, perished in the disaster. There is a Memorial for only three of them on our site. I think we should try and find or create a memorial for each of them and we’re counting on our members and readers.