Chatham, 23 September 2012, was a very wet Sunday. Before leaving for Dartmouth BNC, my wife Toos, her sister José with husband Wietze and me paid a visit to the Chatham Historic Dockyard Museum.

A part of the exhibition is about the three cruisers.

The door of the Cressy is very impressive. It is made of solid wood, so it may have served as a lifebuoy and perhaps saved someone’s life. But it is remarkable in another way too. If one comes closer to have a good look one will see this: 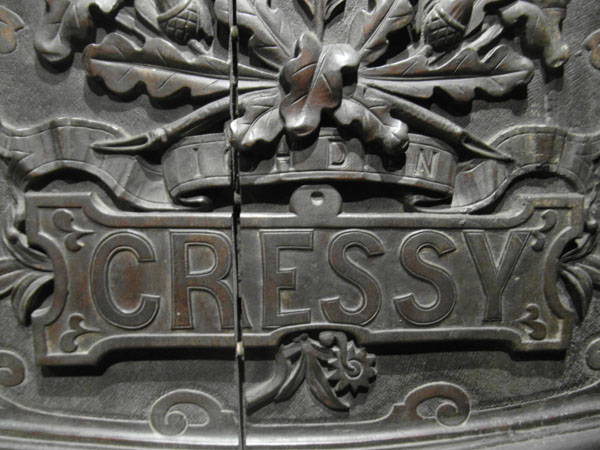 Indeed, Cressy, and just above that: ‘ICH DIEN’. That’s old Saxon or German, and means ‘I serve’. As I kept wondering I searched the Internet. And there I found it: at Wikipedia. 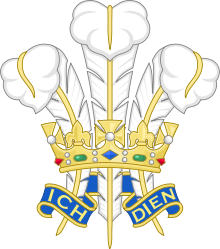 The badge of the Prince of Wales

The Prince of Wales’s feathers is the heraldic badge of the Heir Apparent to the Commonwealth realms thrones. It consists of three white feathers emerging from a gold coronet. A ribbon below the coronet bears the motto Ich dien (a contraction of the German for ‘I serve’, ich diene). As well as being used in royal heraldry, the badge is sometimes used to symbolise Wales, particularly in Welsh rugby union and rugby league. The first Prince of Wales to use the badge in this form was Prince Arthur (1486-1502), eldest son of Henry VII, at the beginning of the 16th century.

There are, however, also more elaborate explanations for this heraldic device, which may make clear why this motto in particular happened to be carved into HMS Cressy’s door,

According to a Welsh tradition, Edward I promised to provide Wales with a prince “who could speak no word of English,” and when his son Edward of Carnarvon was born he presented him to the assembly, saying in Welsh Eich dyn (behold the man).

The more general belief is that it was the motto under the plume of John, King of Bohemia, slain by the Black Prince at Cressy in 1346, and that the Black Prince who slew the Bohemian assumed it out of modesty, to indicate that “he served under the king his father.”

We know that HMS Cressy was named after this battle. So providing her with this motto may have been a deliberate and well-founded choice. Or was there something else behind featuring the Prince of Wales’ motto, perhaps not only on HMS Cressy, but on the other cruisers of the same class (generally known as the ‘Bacchantes’) as well? If anyone is able to shed some light on this interesting topic, let him or her please come forward and send in a contribution.